It is easy to miss the good news around these days when the information flow is massive, but one of the recent Bloomberg’s posts by Jason Schreier got my interest immediately with the title “Video Games Are Slowly Opening Up to More Black Characters”.Just reading the topic alone, I mumbled in my mind, “frickin’ finally!”

Diversity comes in many shapes, colors and forms, and it has been very insightful to be part of game making, where we, the developers, create these interesting characters from scratch and have the power to affect how they turn out.

A couple of years ago, I wanted to understand more about what the market thinks about character design, what the players need, and how we could improve our character diversity here at Nitro Games, so I made a study case.

Honestly, the results shocked me in many ways.

It became crystal clear to me how much the industry caters to the stereotypes and how simple & doable requests our players have to make them feel happy and considered. I analyzed hundreds of comments and feedback, which condensed into “normalizing normal things in games”.

We could make a drinking game out of stereotypes in games characters; “take a shot every time you see…

… an evil doctor with eyeglasses

… US navy guy being toxic and arrogant

…You know the drill, so what can we do about this?

My study revealed many significant actions that we developers can take to offer more diverse characters with fewer stereotypes for our players! Here’s just a few to chew on!

🎨 Consider androgyne characters; plenty of my study’s comments highlighted that you often need to pick the busty babe or alpha male. Simple example: often you are allowed to pick either girl’s hair or guys hair, or have a muscular body only for the guys and thin torso for girls if you have a customized character builder – Why limit this? I won’t be telling you not to wear pink pants because it’s a “girls’ color.”

🎨 Disabilities and enchantments were highly requested – not in a funny cartoony way but in a more relatable way: eyeglasses, a hearing device, braces, cane – and one of the most requested approaches was a character in a wheelchair! Regarding eyeglasses, there were multiple mentions of the harmful swan storytelling that women can be pretty and beautiful only by removing the glasses. It’s all about normalizing these instead of making only the evil geniuses or ugly ducklings wearing eyeglasses and, by doing so, reinforcing the stereotypes.

🎨 Shades and colors! At the time of the study, we thought we had nailed one example of a dark skin character, but in reality, we were far away from what we were trying to portray. The common ground for the feedback was that developers often go with the “coffee with milk” rather than ” dark coffee”, leaving out a vast population without character to relate to. The usual excuse is about the lightning and shaders of the game, which should be a positive challenge to be able to mimic realistic lightning and tones rather than a reason to do only fair-skinned characters.

🎨 Don’t be scared to do “coarse” characters; many respondents requested to see more options for crippled, harsh, ugly, old, and even mental illnesses in character design. And please, please please, in a more profound way, not an overly caricatured way.

Ever since the study, my eyes have been more open for expanding the traits of our characters and while we still have a lot to learn as a company, developers and artists; we were so happy to hear amazing feedback about some of our characters in a game that’s being developed. We organized a playtest session to mostly focus on the technical side of things such as movement and shooting, but the one thing that caught players eyes was our female character with afro hair. Our female testers mentioned this as a positive thing multiple times.

In addition we made one character without a leg, having a mechanical leg instead, with some funny take on it as our game concept was a bit goofy and dystopian, with this choice, we were also able to give the character an unique idle animation. 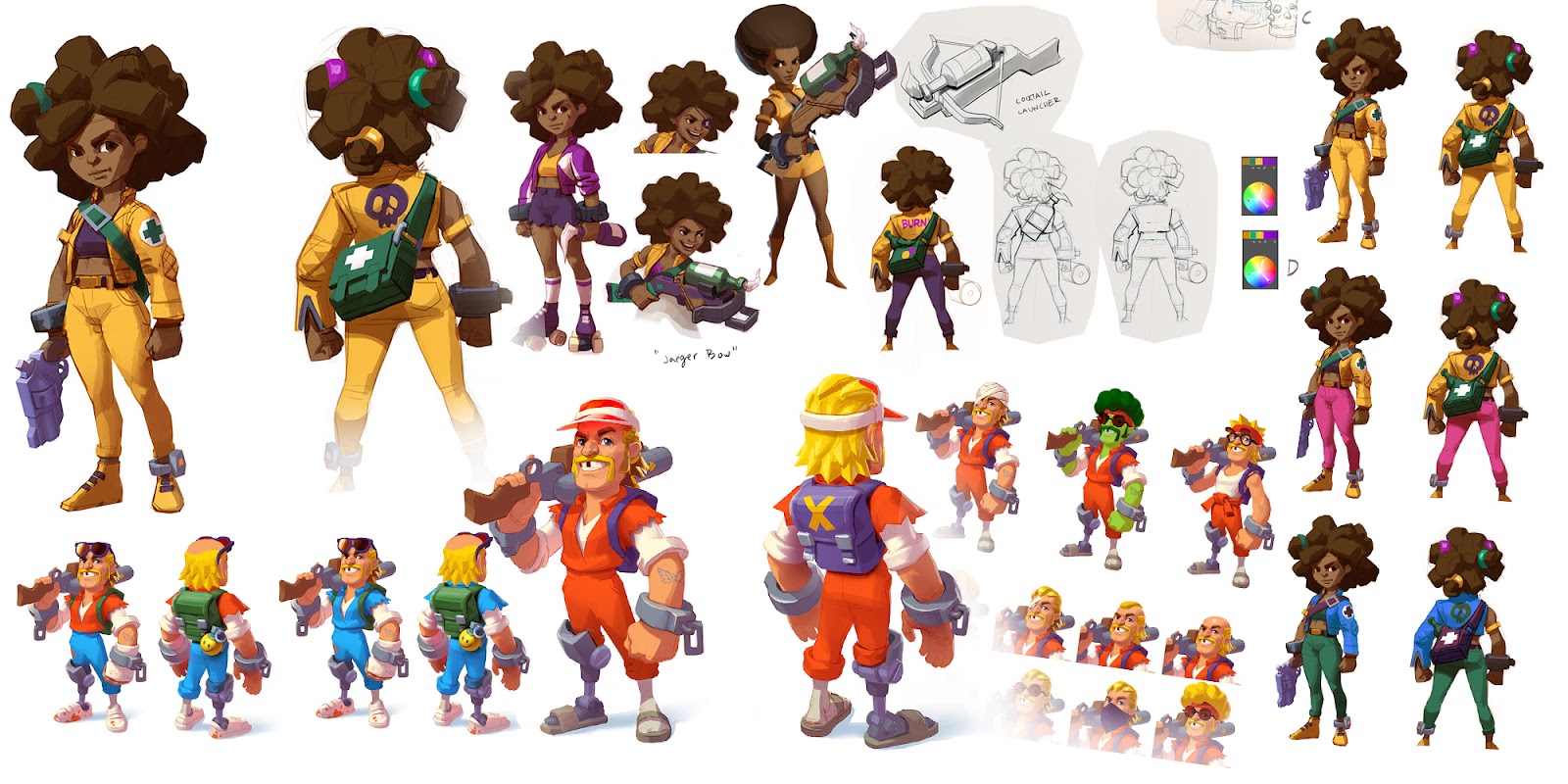 Concepting by Antti Pesonen for the game Lootland

For some inspiration, please take a look at Fallout 4’s scars and pimples in the character creation, Sucker Punch Productions Sly Cooper series with Bentley in the wheelchair or Supergiant Games Transistor for having character(s) like Bailey Gilande brought up as a great example of androgyne character.

When designing the next character, take a moment to challenge your team to think about what would make the character more interesting, unique, diverse, and approachable? What would it take to make it memorable and even cosplayable! 🙌💖